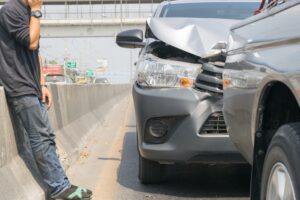 If you’ve been injured in a rear-end collision and someone else is to blame, you could be owed compensation for your medical bills, lost income, pain, suffering, and more. But, contrary to a common misconception, establishing fault in a rear-end collision is not always easy, which is why you need help from an experienced Rhode Island car crash attorney as you pursue a financial recovery.

At Bottaro Law, our attorneys know how to investigate a rear-end accident, determine liability, and calculate a settlement figure that provides the full and fair compensation you deserve. Not only are we skilled negotiators, but we have decades of experience in the courtroom and won’t be afraid to take your case to trial if that’s the best way to pursue the money you need.

Find out what a difference an experienced rear-end collision accident lawyer in Rhode Island can make for your case. Contact Bottaro Law today for a free consultation.

Most Common Causes of Rear-End Collisions in Rhode Island

What percentage of accidents are rear-end collisions? The National Highway Traffic Safety Administration found that rear-end collisions are the single most common type of motor vehicle accident, accounting for about 29 percent of all crashes and a substantial portion of traffic injuries.

In the blink of an eye, traffic patterns can change. For example, a signal may turn, or a driver might apply the brakes. Therefore, motorists must constantly be aware of what is happening around them so they can respond to these changing conditions.

Some of the most common causes of rear-end collisions include:

Common Injuries from a Rear-End Crash

Rear-end collisions often cause severe injuries. Even at relatively low speeds, these types of crashes can result in devastating injuries, including:

How an Attorney Can Help Prove Negligence

Establishing that someone else was at fault for an accident requires showing that they behaved negligently – that is, they failed to act in the way that a reasonably careful person would in similar circumstances. When this negligence results in someone else’s injury, the negligent party is legally liable for compensating the injured party for their losses, such as medical bills, lost income, and property damage.

Multiple parties could be at fault for the same accident, and the percentage of fault each person bears depends on their degree of negligence. Rhode Island follows a pure comparative negligence model regarding car accidents. That means that you may recover compensation following an accident, but your compensation will be reduced according to your share of fault.

In practice, if a court finds you 10 percent responsible for causing a rear-end crash, your compensation award will be reduced by 10 percent. Unlike in most other states, including Massachusetts and Connecticut, drivers in Rhode Island can still secure compensation even if they are 99 percent at fault for a given accident. This pure comparative negligence system binds all court decisions and guides how an insurance adjuster may value your claim.

The more fault the other driver bears for causing the accident, the more compensation you can receive from them. Your attorney can determine that fault by examining evidence like:

Some of this evidence can be hard to secure and may require legal intervention. An attorney can help prove negligence by thoroughly investigating the crash and building a case based on the evidence collected.

Depending on the circumstances of the accident in question, you could be owed compensation for losses, including:

Calculating the value of your rear-end accident claim can be complicated. At Bottaro Law, we have the resources to review your situation and calculate your losses. We will then work hard to negotiate on your behalf for every penny you deserve.

Contrary to popular belief, rear-end accident cases are not always open and shut. It is not always the rear driver who is at fault. One or both parties may be partially responsible. For example, if the lead driver suddenly slams on the brakes without cause, the rear driver may not be able to anticipate when to apply their own brakes to avoid a collision. Chain-reaction accidents, in which several vehicles are pushed into one another following an initial crash, can also be complicated to untangle without the help of an experienced attorney.

There are at least 1.7 million rear-end accidents on U.S. roadways each year. Approximately 500,000 people are injured, and another 1,700 are killed due to these crashes. Data from the Insurance Information Institute show that rear-end accidents accounted for 7.1 percent of fatal crashes in the United States in one recent year.

If you have been hurt in a rear-end accident and you believe someone else is to blame, talk to a skilled Rhode Island car accident attorney from Bottaro Law about your options for recovering compensation. We look forward to meeting you during a free, no-obligation consultation.