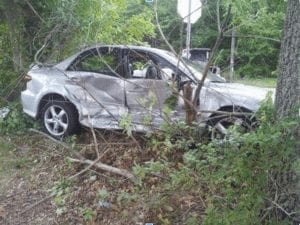 Our client was injured as the passenger of a car in which the driver did not stop for a red light and the vehicle was subsequently t-boned by an oncoming car.

It was summer in Rhode Island when our client was riding as a passenger in a sedan operated by her friend. As the friend approached a stop sign at a busy Rhode Island intersection, she inexplicably failed to stop, continuing out into the middle of the road.

At the exact moment, another vehicle was simply driving straight at highway speeds with the right of way. The resulting T-bone collision was significant, causing our client’s vehicle’s air bags to deploy and the car to spin off into the nearby woods.

Our client bore the brunt of the collision as the point of impact pictured above was near her front seat passenger position. Our client’s head was slammed against the glass and she lost consciousness.

Rescue rushed her to the hospital. She suffered various personal injuries, including a post concussive head injury. Lacerations to her forehead turned into a permanent scar. In the year that followed, the collision caused disruption to our client’s school and work life.