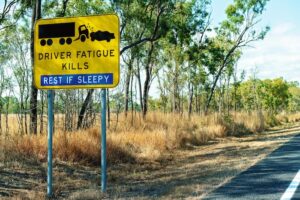 Driver fatigue is a contributing factor in many traffic accidents. Since commercial truck drivers are under enormous pressure to meet their deadlines, they can be especially tempted to drive the maximum number of miles behind the wheel each day. But when a fatigued driver is operating a multi-ton vehicle, they put themselves and everyone around them at serious risk of catastrophic injury.

While various federal regulations discourage drowsy driving and reduce accidents caused by driver fatigue, unfortunately, truck driver fatigue accidents are still alarmingly prevalent. If you have been injured in an accident in Rhode Island caused by a fatigued truck driver, you have the right to demand compensation for your injuries and other crash-related losses.

At Bottaro Law, our dedicated personal injury attorneys have recovered millions of dollars in settlements and verdicts for injured Rhode Islanders. We are ready to put this experience to work for you.

Contact our firm today for a free consultation to learn how we can help you demand the recovery you deserve.

How Dangerous Is It to Drive a Truck While Tired?

We all need sleep, and our bodies run on preset cycles of wakefulness and sleep known as circadian rhythms. Commercial drivers commonly work long hours and odd schedules. They often have to overcome their natural sleep cycles to keep up with their jobs. Habitually losing even one or two hours of sleep can lead to chronic fatigue, placing drivers and other road users at risk.

According to research by the National Highway Traffic Safety Administration (NHTSA), drowsiness increases the likelihood of traffic collisions because it impairs:

These impairments increase the risk of truck accidents because they reduce truck drivers’ margin of error. When a driver is operating a vehicle several times larger and heavier than a standard passenger vehicle, even a split second can mean the difference between an uneventful commute and disaster.

The following statistics from the Federal Motor Carrier Safety Administration (FMCSA) and the National Safety Council (NSC) highlight the dangers of driver fatigue:

A drowsy driving truck accident can occur whenever and wherever commercial vehicles are operated. However, NHTSA data suggests these crashes are widespread:

The FMCSA has developed a variety of regulations to discourage commercial drivers from driving while drowsy and reduce the risk of fatigue-related accidents. These hours of service (HOS) regulations require truck drivers to:

Unlike alcohol or drug intoxication, no test can prove that a truck driver was drowsy at the time of a truck accident. However, investigators can often draw reliable conclusions when crashes have specific characteristics, such as:

Who Could Be Liable for a Truck Crash Due to Fatigue?

The truck driver is often primarily or solely liable for an accident caused by drowsy driving. Each commercial driver is responsible for understanding and obeying HOS regulations and other FMCSA rules, which include recognizing when fatigue dangerously impairs their driving abilities.

However, truck drivers are not the only ones responsible for their on-the-job actions. If a trucking company explicitly or implicitly encourages its drivers to ignore HOS regulations, it may be vicariously liable if drivers work themselves to exhaustion and cause drowsy driving truck wrecks.

How to Prevent Drowsy Driving

The FMCSA provides the following tips for avoiding fatigue behind the wheel and preventing drowsy driving accidents:

If you’ve been injured in a truck accident caused by a drowsy driver, the Rhode Island injury attorneys at Bottaro Law can help you by:

If you’ve been severely injured in a fatigued truck driver accident, the respected, compassionate legal team at Bottaro Law is here to help. You don’t have to take on the large trucking and insurance companies alone. We can level the playing field and demand the full and fair compensation you deserve.