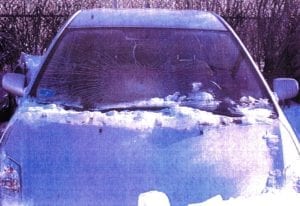 A Newport woman was struck by a drunk driver while crossing the street, resulting in lasting impairments.

On a snowy evening, the female defendant had consumed over four alcoholic drinks before leaving her friend’s house and intending to drive home. As she traveled, she failed to see two women crossing the street in Newport, Rhode Island.

The defendant struck our client with such force that our client was vaulted onto the hood and slammed her skull into the windshield. The force caused the cracks shown in the adjacent photograph. Our client landed on the back of her head onto the pavement, and slipped into unconsciousness. The responding police officer noted that the defendant reeked of alcohol, was slurring her words, and overtly failed all field sobriety tests. The defendant blew a high BAC and would later plead nolo contendre to driving under the influence.

Our client, a 25-year-old woman, was rushed to Newport Hospital. Her first memory after the collision was waking up there. Her initial diagnoses, among others, were a grade 3 concussion, hairline fracture of the fibula, and neck and back pain. Over the following two years, our client underwent physical therapy and neuropsychological testing.

At binding arbitration, Attorney Mike Bottaro and the other injured woman’s attorney presented direct examination of five (5) witnesses regarding liability. Mike also presented written expert evidence from our client’s treating neurologist as well as other evidence. The able defense counsel argued that our client failed to maintain a lookout crossing the street in a non-crosswalk designated area and also disputed causation of injuries. The three member arbitration panel awarded our client an amount that with interest totaled $66,240.