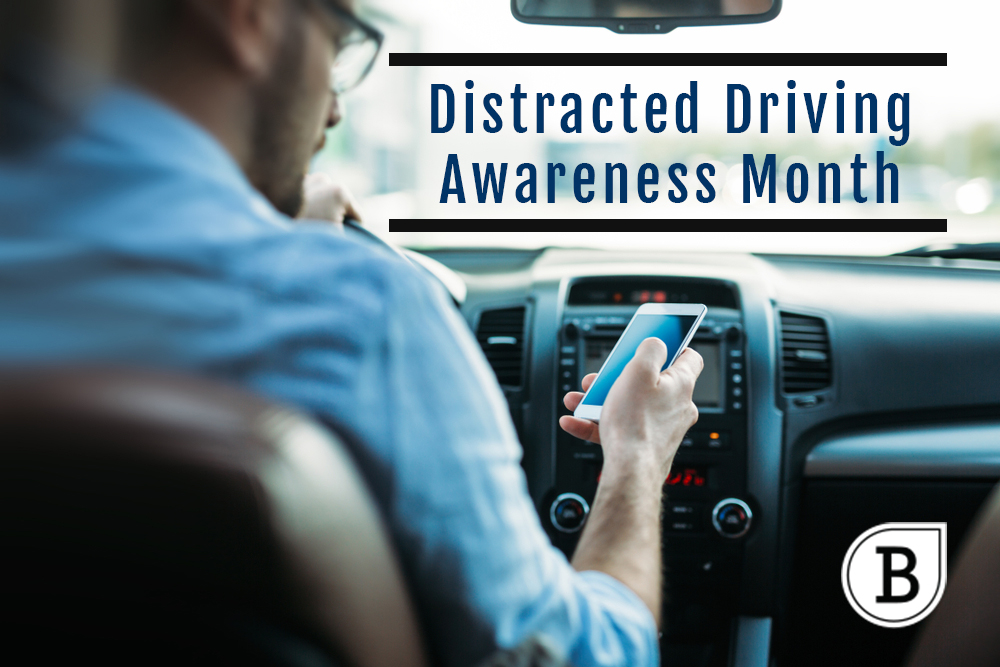 April has been designated as National Distracted Driving Awareness Month and as we head into the warm weather season, it is more important than ever to warn our younger drivers about the dangers associated with texting while driving.

Attorney Bottaro is the founder of the Bottaro Law Firm LLC, a personal injury law firm serving residents of Rhode Island and Massachusetts. He has written and spoken extensively about the dangers of distracted driving, especially emphasizing the issues with texting while driving.

During a CBS television interview, Attorney Bottaro cited a study that established the average person texting and driving has their eyes off the road for a whopping five seconds. “As a RI car accident lawyer, I have witnessed numerous preventable tragedies in the recent years caused by drivers distracted by texting and driving,” Bottaro added.

He noted that Rhode Island is one of 36 states that currently prohibit texting while driving. Legislators are considering stricter laws such as banning the use of handheld cell phones except for emergency personnel. Attorney Bottaro noted that Rhode Island legislators are again considering such a measure during the 2012 legislative session. “Rhode Islanders should contact their elected officials and urge passage of this important safety law,” said Bottaro.

In advocating for stricter laws, Bottaro cited a recent study released by the State of California. The study reviewed car accident crash data relating to distracted driving both before and after California’s 2008 law prohibiting texting while driving.

“Their study found a significant decline of car accidents caused by distracted driving since the 2008 law. This supports the notion that stricter laws can work, especially in tandem with education,” added attorney Bottaro. “As any top-rated RI accident lawyer will tell you from experience, younger people especially are causing more car accidents on our Rhode Island highways from texting and driving.”

The term “distracted driving” refers to any activity that can take away a driver’s concentration.  Studies have established that operating a motor vehicle demands a driver’s full attention, as it requires a nonstop brain process of interpreting data and reacting to external stimuli.

Distracted driving is the leading killer of American teens.

Perhaps the number one car accident safety issue on the road today is the misuse of cell phones while driving. In addition to texting while driving, distracted driving covers other unsafe activities such as eating, grooming, paying attention to passengers, manipulating the radio, etc.

Six statistics about distracted driving everyone should know:

Rhode Island Department of Transportation reports that motorists who text and drive are 23 times more likely to get into a crash. These odds are much higher than motorists who drive above the legal limit of blood alcohol content. Despite these numbers, Rhode Island remains much more lenient to cell phone use when compared to nearby states like New York, Connecticut, and New Jersey.

New York recently launched an aggressive campaign to curb texting and driving by implementing an innovative plan that both monitors cell phone use and encourages safe texting. New York State Police will use tall SUVs to peer into a car and check if the driver is holding a cell phone. The state also created “texting zones” on highways for drivers to pull into a safe zone in case an impending call or text must be answered.

Rhode Island is not obligated to take such an extreme route to lessen the cell phone use problem. But one way the Ocean State may push forth efforts to curb texting and driving is for the Rhode Island Supreme Court to rule on cell phone use while driving. By providing a thorough ruling on the issue, cell phone use will be considered RI distracted driving, and therefore can definitively be used as evidence of negligence.

In our experience as top rated personal injury lawyers, distracted driving in any form, is unsafe to all of us in our Rhode Island and Massachusetts communities. For this reason, we have devoted resources to producing Public Service Announcements (“PSAs”) that focus on the dangers of distracted driving and we support ministry efforts to raise awareness on this important issue.

If your family has been affected by a distracted driver and have experienced personal injury, we stand ready to prosecute your case to the fullest extent possible.  Delay can hurt your case. Contact us now for a free confidential consultation at 866-529-9700.