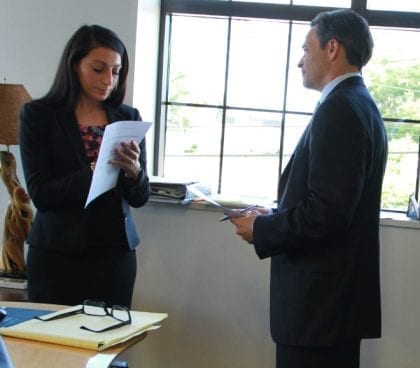 A Rhode Island Superior Court jury found in our favor and against GEICO for our clients’ 2014 car crash.

We represented a husband and wife who were on their way to Wrentham shopping outlets on a sunny summer day in August 2014 when they were rear-ended on 95 North near the Thurbers Avenue exit. They were rear-ended by a NY attorney who was on his way to vacation in Cape Cod and who admitted he became distracted by some loud ATV’s passing southbound, causing him to take his eyes off the road and strike the rear of our clients’ vehicle.

On impact, both clients struck their heads on their respective headrests and developed neck pain as that Sunday progressed. They together presented to the hospital the next day where they were both evaluated and x-rays completed. They were each diagnosed with neck sprain and strain.

Their conditions worsened, and as a result, they both followed-up with conservative chiropractic treatment over a period of three months, which is typical for these types of injuries.

Upon our clients’ discharge, pre-suit claims were presented to GEICO who refused to settle, despite admitting their insured was at fault, based on an ill-suited claim that because there was low property damage, our clients could not have been injured.

Insurance companies often attempt to make this argument to avoid compensating legitimately injured people. But, there is no scientific basis for the insurance company’s argument as there are many factors to consider in a rear-end collision including head position of the injured person, the vehicle itself, objective findings of injury, and the transfer of force. When you think about it, if you hold a glass of water, and someone comes up behind you and pushes you, you are likely going to get wet. In a similar way, regardless of what happens to a car’s bumper in a rear-end crash, the force of the impact may still injure the occupants.

Because GEICO refused to pay, we filed a lawsuit in Providence County Superior Court and proceeded through the steps of the lawsuit. Eventually, an arbitrator returned awards for our clients, which GEICO still refused to pay, essentially forcing us to take the case to a jury trial.

It took four years for our clients to get their day in court, but they finally did in early March. They were both cross-examined by GEICO’s attorney, and the defendant, a NY resident, elected not to attend the trial. Our client’s treating chiropractor was tendered as an expert, and he taught the jury about neck injuries resulting from rear-end crashes.

At the end of the two day trial, a jury of eight (8) returned a unanimous verdict against GEICO and in favor of each of our clients. Together with interest and costs, they were awarded over $20,000.00.